How to play guide for Meeple Station

This page will serve as a basic how to play guide for Meeple Station. While there is very little information available at this time, we urge you to check back often, as new information is being added all the time! Feel free to edit this guide with any tips, tricks, and suggestions.

After starting the game, the player can choose a language, and at the moment there are (or coming soon with the next update):

There are five difficulty settings in Meeple Station:

When all necessary settings are done, players will arrive in the game window and will be able to launch their first station. 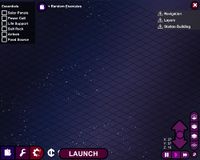 Needed essentials of the Station are:

At the top of the window, players can have a look at and choose Random Examples of Stations, at the bottom of the window to the left are buttons for Blueprints, Build and Salvage. On the right-hand side are the layers and one can click through them from top to bottom layer and the isometric grid can also be switched on and off there. Below the layers, the players can pause, and run the game at normal speed or fast forward. With the up-and-down arrows, the station can be moved.

Under the menu build, players will find different lables with modules, structures, power and furniture to build:

This menu will reappear later.

When done in this window - press launch and you will be randomly placed on the map.

Press "L" to open the map. Some areas are rich in resources, but also have pirates and other hazards. 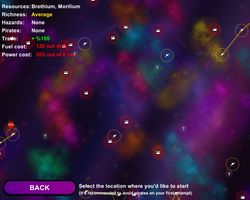 NOTE: THIS WAS REMOVED IN THE DEC 19 UPDATE- NO LONGER APPLIES

The first action of the player should be to visit the Hierarchy by pressing the P button and to choose a captain from the available Meeples.

When the Station has a captain, the other Meeple should start to do something. For example, the station easily becomes filthy, so somebody should hire a janitor! Press "M" to open that menu.

Available jobs on the station:

When any Meeple are unhappy with a task, they'll leave!

"I" opens up the Inventory menu, here, players can create "Tickets" for resources they want to have refined.

"F" opens the research menu. There are different branches of technology to discover.

"B" opens - like the window before, the build menu. The labels are the same.

Press "V" and send out the assigned Meeple to gather assigned resources.

Meeple Station is played with Mouse and Keyboard.